In bed with foes:
U.S., Israel, China,
And Iran: Foolish

RISING TO A NEW HIGH IN POLITICAL AND MILITARY STUPIDITY, three countries have climbed under the covers with China:

While President Trump is trying, despite leftist Democrat opposition, to wean the U.S. from cheap Chinese products — somehow “goods” seems inappropriate for things from China —, Israel is surrendering its Haifa and Ashdod sea ports to the Chinese, and the Chinese are buying oil from Iran in exchange to technology — technology that may be used against the U.S. and Israel, the “Big Satan” and the “Little Satan” according to the ayatollahs.

The Chinese already own a number of companies in the U.S. and Israel, including major food processing companies.1, 2 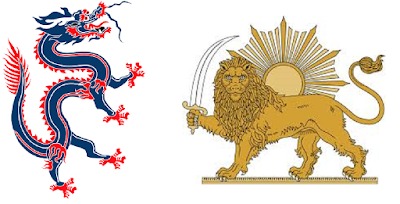 The most prominent foreign acquisition of an American food company in the past few years was Chinese company WH Group’s 2013 purchase of Smithfield Foods for $4.7 billion. The combined company is the largest pork producer in the world. WH Group, formerly known as Shuanghui, allegedly has received subsidies from the Chinese government. The deal was the largest ever Chinese acquisition of an American company. Brazil may be an even bigger buyer of U.S. food companies.3


The Chinese are pervasive both in the U.S.4 and Israel,2


Is there a danger to U.S. and Israeli security from the Chinese invasion? The Rand organization seems to support this with its RAND_RR3176 report5.


The Chinese are known for stealing technology from any and every source.


Why would ANYONE invite a known thief into their home?


No one with an ounce of sense would do that.


Worse, why would ANYONE invite a known thief into their home when the thief is cozy with someone who wants to harm, to kill, them?


Yet, both Israel and the U.S. allow the Chinese thieves into their homes.


The old expression: “You get what you pay for,” while grammatically wrong is, still, sadly true. When you “buy cheap,” you get cheap.


The trouble with buying Chinese — or worse, letting the Chinese buy into the house — is that not only is the purchased product shoddy, but the thief in the house is stealing from his or her host.


China has proven it doesn’t care for its customers.


Despite U.S. laws to the contrary, China has sent to America

Drywall that gave off volatile chemicals and sulfurous gases


Israel has allowed Chinese companies to dig tunnels for public transportation, and well as permitted it to build light rail systems.


Given that the Chinese are in bed with Iran, and that Iran repeatedly, almost continuously, threatens to “wipe Israel off the map,” the Iranians now know more about Israeli tunnels and infrastructure than is good for Israel.


The Chinese need Iran’s oil more than they need Israel — and America’s — money.


Common sense, a commodity the leaders of Israel in particular seem to lack, would caution against doing business with the friend of my enemy.


MEANWHILE, Iranian Foreign Minister Mohammad Javad Zarif said that Tehran has been negotiating a 25-year accord with China, terms of which will be announced once a deal is struck, French news agency AFP reported Sunday.6


There is a famous saying in the Middle east: “An enemy of my friend is my enemy.”


Israel and the U.S. would be well advised to consider the implications of an Iran-China liaison.

PLAGIARISM is the act of appropriating the literary composition of another, or parts or passages of his writings, or the ideas or language of the same, and passing them off as the product of one’s own mind.


Truth is an absolute defense to defamation. Defamation is a false statement of fact. If the statement was accurate, then by definition it wasn’t defamatory.

Posted by Yohanon Glenn at 4:03 PM